Translator Huw Davies is translating Dmitrii Bykov’s historical novel «June» («Июнь», 2017) and pitching it to publishers with the aid of a RusTrans bursary. Here he talks about how the novel spotlights a special Soviet preview of what we now call ‘cancel culture’. You can read the passage he discusses here.

Picture this scene from a novel: the student body at a university has been convened so that an allegation of harassment, made against one of the male students by a female student, can be discussed and a decision reached on how to punish him. We, as readers, already know that the allegation is false and that the girl who made it, Valya, was coerced into doing so by someone who had misunderstood the situation. Fairly quickly, the focus of the debate shifts away from the ‘he said, she said’ of the alleged incident, and the discussion becomes an assassination of the accused’s character, with a series of his peers standing up to cast aspersions on him and only one speaking out in his defence. Now transpose the image in your mind to the Soviet Union in 1940, and you will have something resembling the nightmarish scenario which confronts Misha Gvirtsman, one of the protagonists of «June», at an early stage of this novel in three parts by Dmitry Bykov.

It is a memorable set-piece that poses challenges to the translator. There is a diverse range of characters whose voices need to sound convincing — from Misha’s sole defender, who has an Engels quote (real or made up) for all occasions, to the two main accusers, the “twitchy” Nikitin who needs, “at any cost”, to make someone else “the odd one out”, and the forthright Goltsov, who seems to take an inordinate amount of pleasure in not being “overly sophisticated”. Goltsov even appears to have rehearsed his speech in advance, and he calls for the student body to “purge the ranks” of people like Misha, with their “lordly attitude” and “high-brow sparkle”. The grandstanding of these self-appointed prosecutors calls to mind the show-trials of the 1920s and ’30s, and the talk of “purges” reminds us of those who were exiled or summarily executed during the Great Terror. Misha senses his accusers have calculated that “the less there was of him [Misha] at the university, the more there would be of them” — but he also suspects there is a more sinister reason for the hostility towards him, one that goes beyond mere jealousy of his skill as a poet.

Misha’s public humiliation can be seen as an instance of ‘cancel culture’ avant la lettre. He is suspended from the university for a year. Will he continue to be drawn, against his better judgement, to Valya? The love-hate relationship between them is of the kind one might find in a novel set in the present day, but it is taking place at a particular moment in history when there is a global catastrophe around the corner. The death of Valya’s ex-boyfriend — killed in action after volunteering to fight during the Soviet-Finnish ‘winter’ war — serves as a reminder of the fate that may await Misha. The invasion of the Soviet Union in June 1941, about which these characters are blissfully unaware (during a parlour game at a party, they take turns putting on a blindfold, symbolizing this ignorance of what the future holds) will ultimately upend all of their lives and cast everything into uncertainty.
Huw William Davies («Twitter»)

Excerpt from «June» («Июнь», 2017) by Dmitry Bykov, translated by Huw Davies. Read the translator’s introduction to this extract here. 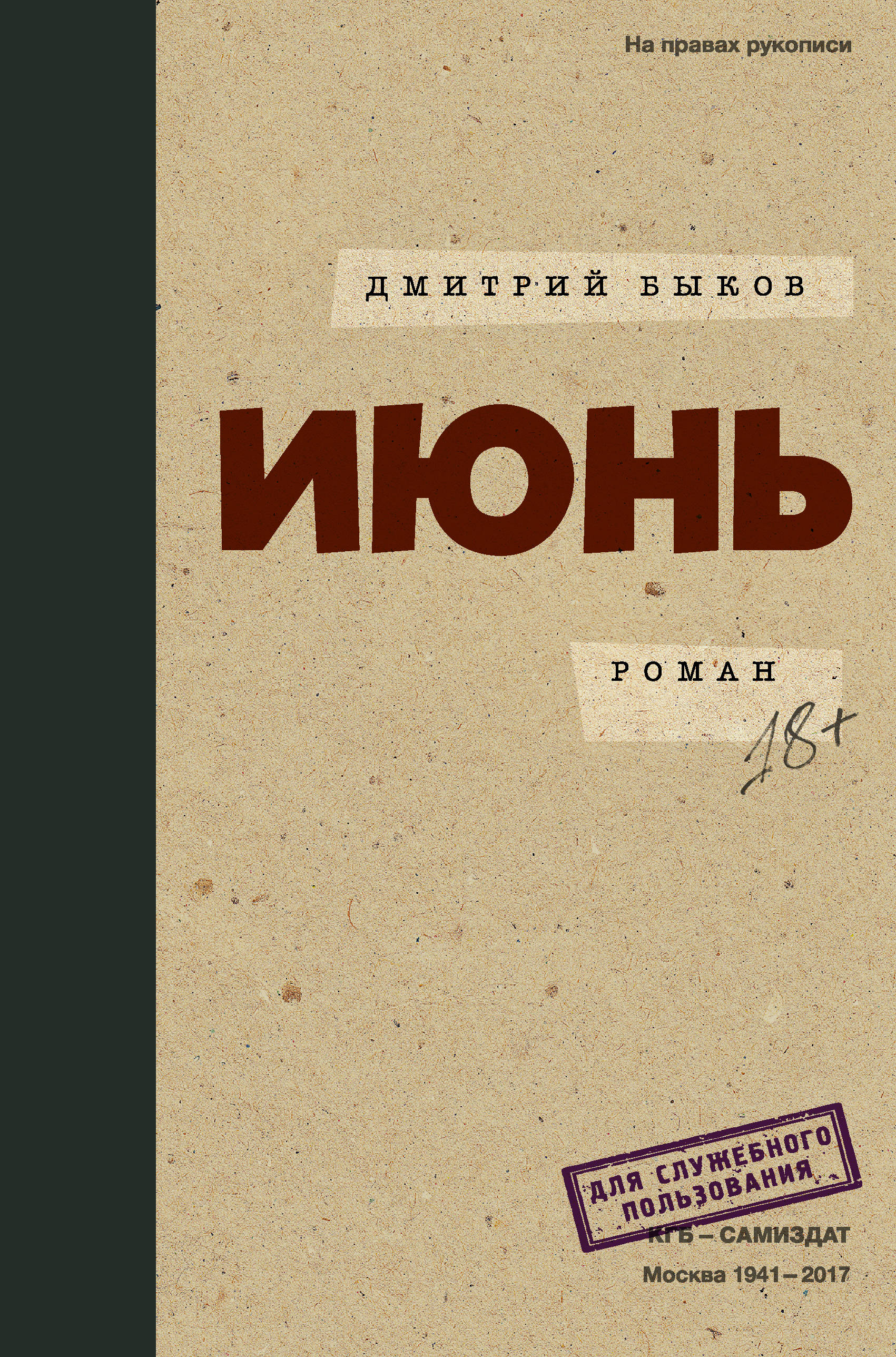 Someone had forced her to make the allegation, he rightly surmised — but whose toes had he trodden on, that they should want to do that?

“Comrades,” said Draganov in a high-pitched, scoffing voice, stepping out onto the podium. “I asked you to gather here today so that we could respond as a matter of urgency to a complaint brought by Komsomol member Miss Krapivina, the widow… or rather, the girlfriend of our student Nikolai Tuzeyev, who was killed in battle near Suoyarvi. Miss Krapivina was subjected to crude harassment by one of our students, one of our comrades” — he paused, just long enough for everyone to wonder, in horror: It wasn’t me, was it?! No, don’t be daft — not guilty even in thought, let alone deed! — “Mikhail Gvirtsman.”

There was a sharp intake of breath around the auditorium — or rather, the release of it, in a collective sigh of relief: no-one imagined Gvirtsman could have done anything violent, and consequently, there was no cause for alarm. Misha started smiling with embarrassment, blushed, and suppressed a desire to take a bow. A fellow called Soifert even winked at him. This might all come to nothing, it really might.

“I am not going to ask Komsomol member Krapivina to share details of the circumstances. Take my word for it, they took place, I have studied the situation. We shall listen to what Comrade Gvirtsman has to say, and he will set it all out to us in person. I propose that we then express our views on the essence of the matter.”

“How can we talk about the essence?” people shouted out from their seats. “We didn’t see anything!”

“Gvirtsman should be encouraged!” someone shouted from their seat in a facetious voice. “He doesn’t pay women enough attention, it’s rude!”

“I should like to call upon you to take this matter seriously,” Draganov intoned, as if preparing for this kangaroo court to turn into a farce at any moment. “Comrade Krapivina feels she has been insulted!”

“Let’s hear Krapivina’s side of the story!” a clamour of voices demanded.

“I don’t know, comrades, whether she would feel comfortable… Are you willing to speak, Comrade Krapivina?” Draganov asked with assiduous courtesy.

“Of course,” Draganov nodded, “of course.”

“On the third,” said Valya, then she fell silent. “Of this… of the present… year,” she went on, “we were at Klara Nechaev’s place. Everyone had had a bit to drink. No-one was drinking heavily though.”

A murmur of approval rippled around the auditorium once again.

“Always the way, when there isn’t enough alcohol,” the same wit as before shouted out.

“A few individuals were out of control, though, and then Gvirtsman,” Valya said, and then she fell silent again. “While people were dancing…he took the liberty…there has never been anything between us at all. I haven’t let anyone so much as…as you know. But Gvirtsman, all of a sudden…he didn’t give me any warning about anything.”

“What was he playing at!” a female voice cried out — Sasha Brodskaya, Misha reckoned.

“And then it happened,” Valya muttered, dragging it out for dramatic effect. “He tried to kiss me, I pulled away. He tried to hug me, I pulled back further. People noticed, it caught their attention. I don’t know what they must have thought of me. I wanted to give him a slap, but I stopped myself. He got the message without that being necessary. And since I think that it’s immoral, I’d like to see him censured. Censured by everyone.”

“She’s an outright deviationist if you ask me,” Poletaev whispered to Misha, leaning back over his chair.

“Well comrades, you have now heard the whole story and you may express your views,” Draganov suggested.

After raising her hand like a schoolgirl and not waiting to be given permission, Golubeva stood up, all red in the face; she moved jerkily, the whiff of her breath as foul as ever. Misha was convinced she was about to speak out in his defence, and he felt ashamed at having thought about her bad breath.