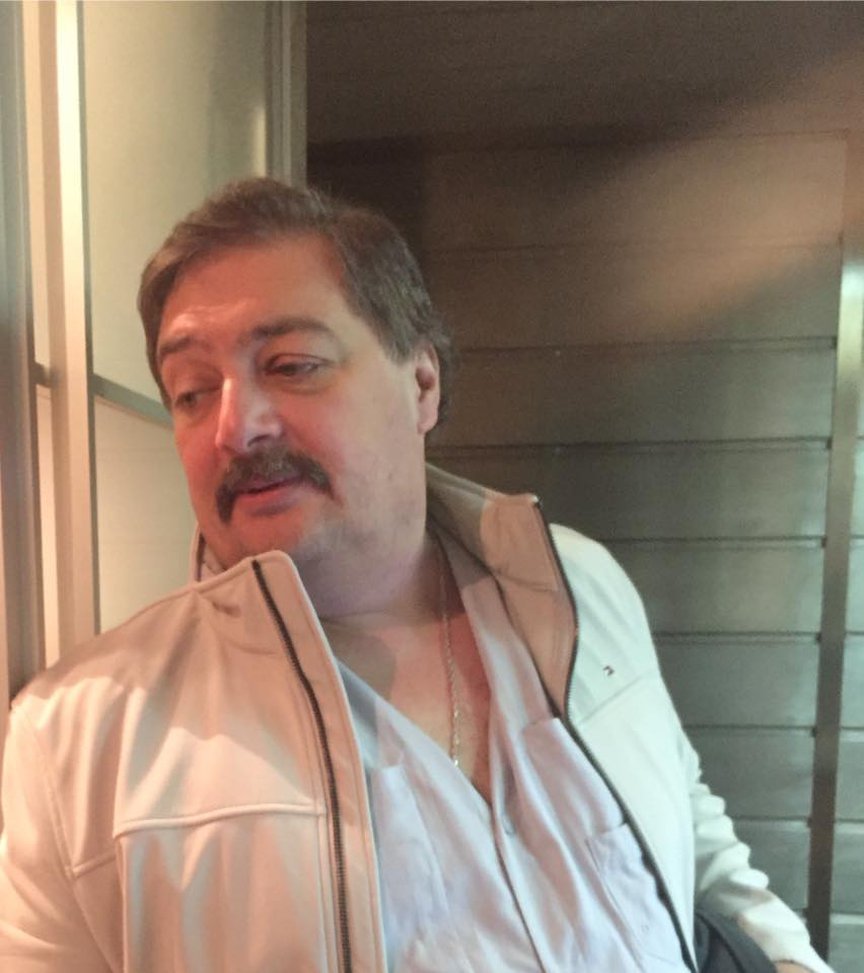 Bykov's lies about Hitler and Russians

Famous Russian writer Dmitry Bykov, a recent outrageous statement about Russia and Hitler - stupid, it would not be worth commenting on. But I will try.

Let us not hide the fact that in Russia at that time there was a certain part of the society that was ready to support the Germans against the Soviet power. And there were those who met the Germans with flowers and bread and salt, who voluntarily went over to the side of the Germans or simply deserted and surrendered to captivity. The Germans were not perceived by the fiends of hell, and, even by the same Jews, people knew little about Hitler’s and Nazi’s plans for Russia and the Russians. Moreover, the information from the Soviet authorities was perceived as a lie, considering that Soviet propaganda was lying. And from the First World War, the conviction was preserved that the Germans are a “cultural nation,” and there will be no cruelty. They compared this with the bitterness of the civil war, with the atrocities of the Bolsheviks and thought that the Germans would not behave like that. And for this reason, at first the residents of the occupied territories had the thought and hope that they would be “freed” from the Bolshevik regime, that the collective farms would be dispersed, and so on.

I note that the guerrilla groups were originally prepared by the cells led by experienced party activists and commanders. We also add here the Komsomol members, who were ideologically motivated people, had an organization, and most importantly, were young and ready to take risks. They were brought up on the idea of ​​achievement and self-sacrifice, so for them the war became an occasion to prove themselves. and i must say. the godless organization created to brainwash young people in the spirit of communism, showed itself worthily during the war years, giving a huge number of heroes of the Soviet Union, partisans and underground fighters who fought against the invaders and took a heroic death, as did the famous youth guards.

But when the invaders began to destroy the population and behaved like an invader, they realized that they were occupied and came to kill. The Germans often did not dissolve the collective farms - this was extremely convenient for selecting food from the population and supplying the German army. The Germans did not hesitate to rob, rape and kill. moreover, often a dirty business was entrusted to them by “defective” Ukrainian collaborationists. All this did not please the people who realized that these were invaders, who needed their land, and active resistance to the invaders began. People went to the partisans and began to fight the invaders.

The Russians in the Red Army and in the unoccupied territory also realized that the Germans are the enemy, and the First World War must be won and the enemy must be defeated. Actually, we all remember very well that the Bolsheviks, having come to power, signed the bawdy Brest Peace with the Fourth Union and withdrew from the First World War as losers and de facto allies of Germany. Lenin actively promoted the defeat line of Russia, was the leader of the Russian defeatists. And having come to power, this line was carried out consistently and to the end. The Bolsheviks actively made friends with Germany from March to November 1918, then resumed it in 1922, concluded a secret cooperation agreement in Rapallo, and helped Germany rebuild the army, as well as actively with the help of the Germans and strengthened their own too. In 1933, the Nazis came to power in Germany and cooperation ceased, but in 1939, the USSR and Germany first signed the Molotov-Ribbentrop Pact, and then the Treaty of Friendship and Frontiers - and in fact continued the same Lenin pro-German line again. In fact, at a high state level, the frank betrayal of his own country was famous, defeatism was glorified. So what can I say?

Appeal of Soviet power to Russian motives, connected with Zhdanov played a role. They began to talk about the great Russian people, they began to recall that the Prussian Russians always beat. The film “Alexander Nevsky” has gained simply wild popularity - if it was stopped because of its friendship with Germany. now he was given full speed. This film became very popular and for many years remained one of the best films of Soviet cinema. He played a great moral value in educating the people in their readiness to fight the invaders. And this is just a separate example. There were books, and other films, and so on - although in a limited form and strictly selected by the Soviet leadership, but all this affected the consciousness of the soldiers of the Great Patriotic War in their readiness to fight for the country. In addition, odious representatives of the regime, who were non-Russian and fierce Russophobes, were previously destroyed. And so there was hope that the regime could change and God would change the horde. There was some kind of hope. Also, it should be noted that the attitude towards the persecuted godless state of the Church has changed. Led by Locum tenens Metropolitan Sergius, she openly, from the very first day, came out against the enemy and called upon her flock to fight the invaders. In 1943, the Patriarchate was restored. In fact, the godless power capitulated to the Church, which decisively withstood the day of persecution. God saved Russia in the Great Patriotic.

In any case, talking about the “popularity of Hitler” is such nonsense, lies and delirium, frankly anti-Russian. There was no “second civil”, the war was exactly the Patriotic one and this was picked up by the majority of the population. And those few who went over to the side of the invaders turned out to be against their own country and their people. And, in fact, even among them, Hitler's fans were negligible and they were outspoken marginals. The majority saw in the Germans only a temporary ally in the struggle against Bolshevism, which could then be "thrown". But, apparently, they did not understand with whom they contacted. That in case of victory, the Reich will immediately destroy them. What Hitler saw in Russia “living space” for the Germans, and the Russians were seen either as unwanted dead, or as slaves.

About Vlasov in general it would be worth talking separately. Actually, it is now called so all Russian collaborators. But the Vlasovists themselves are those who were listed in the Russian Liberation Army, led by Germans who had gone over to the side of Lieutenant-General Vlasov, who most of the time was a propaganda phenomenon and only at the very end, when Germany was on the verge of defeat, entered the war - but from This did not work. It is worth noting that until the middle of 1944, the project was overseen by the military, who organized a conspiracy against Hitler. The same von Stauffenberg personally worked with Vlasov. And obviously they had some kind of their own goals, their own views, and plans for collaborators' detachments. Then Vlasov was under the control of Himmler, the head of the SS. Most of the Vlasovites were left by Russian prisoners of war who went to the service to the Germans not because they hated Bolshevism so much, but to save their lives. The conditions of detention in the prisoner of war camps were monstrous - Hitler's Germany, although it signed the Geneva Convention on Prisoners of War and was obliged to comply with it in respect of even those who did not sign it (like the USSR), did not respect it in our country. Moreover, the Germans were on hand Bid order №270 about the surrendered commanders and political workers of the Red Army and considered deserters, and that their families should be arrested and deprived of allowances. There was propaganda in the camps - “Stalin refused you, you are all considered traitors and deserters, your families are repressed,” and so on. And listening to it all and being pushed by inhuman conditions, the prisoners went to the service of the Germans.

By the way, what is important to note is that this was often done in order to run back to your own back when convenient. Almost all the saboteurs thrown by the Germans and agents hired from prisoners of war immediately went to surrender and willingly cooperated with counterintelligence to atone for the forced transfer to the service to the Germans. 1-I Russian national team of the SS "Druzhina" under the command Gilya-Rodionova almost in full force went to the partisans. Poet Musa Jalil in captivity he joined the Idel-Ural Legion and did underground work, during which the 825 Battalion of the Legion passed to the partisans (the personnel of the other battalions also often went over to the partisans and the Red Army), prisoners escaped and prisoners prepared for a rebellion, which did not take place due to the arrest of the underground workers who were executed.

In general, our history is rather complicated, there are very controversial points in it and there are such things that do not fit into the bipolar Bolshevik or liberal picture of the world. There are some episodes that do not fit in the mind at all, and some are better to be considered extremely carefully and without ideological assessments. Such personalities as the Bulls (aka Zilberdrud), with their statements of this kind, cause only hatred in the people. And they do it on their own stupidity, most often. Therefore, civil society. caring people should not be silent, but give a clear answer to this citizen poet. What I am doing. The history of Russia and the Russian people in the twentieth century is very complex, difficult and very tragic. Therefore, to study it is difficult and sometimes difficult. But it needs to be done. And certainly we will deal with it without the bulls.
«Вот, собственно, и всё, что я хотел сказать о Дмитрии Львовиче» ©
Tags: скандальчики, чужое мнение
Subscribe